Global and Chinese Markets for Boron Minerals: Oligopoly and Collaboration 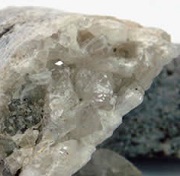 Borates (e.g., borax, kernite, ulexite, tincal, colemanite, etc.) form a class of about 80 minerals that are actually boron-containing inorganic salts. The processing of these minerals and their utilization in many, often high-tech, applications make them an important element of multiple commercial product chains. The most popular immediate products include borax pentahydrate, borax decahydrate, boric acid, and boric anhydride. Their applications include such diverse industries and products, as glass, ceramics, agriculture, detergents, power generation, fire retardant materials, metallurgy, enamels, textile, electronic components, lubricants, food industry, pharmaceuticals, insulation, oil industry, to name only a few. Such versatility, magnified by their importance for the health of humans and plants, make borates truly indispensable.

Despite their relative abundance in the earth crux, their extraction and refining are complex operations, while the geographic distribution of the commercially viable boron minerals around the globe is extremely uneven.

Boron minerals: structure of the global reserves of by country 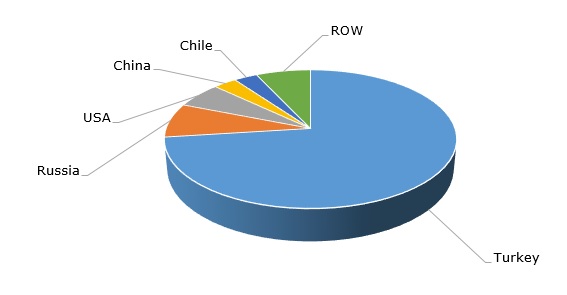 Turkey accounts for over 70% of the borate reserves (via Eti Mine Works corporation), especially of borax, ulexite, and colemanite minerals, which are the largest in the world. Of course, colemanite reserves may pose an issue due to concerns over high arsenic content.

Other major players include Russia (e.g., Mining Chemical Company Russian Bor with the Dalnegorsk deposit) and the US (e.g., Rio Tinto, represented by US Borax).

China accounts for just about 3% of the global borate reserves. The most abundant boron minerals in China remain ascharite, tincal and borosilicate. Minable borate resources locate mainly in Liaoning, Qinghai and Jilin provinces. Though there are over 100 deposits of such resources in China, their mining potential is very low and they are low-grade, so China has to import a significant amount of borates (mainly from Chile, Turkey, and Russia). With its domestic boron production of about 160 thousand tonnes per year in terms of boric oxide, it is clear that this amount could never meet the rising demand for borates. In addition, China has large territories of boron-deficient soils, which is detrimental for agriculture. Currently, boron minerals consumption in China grew by an average rate of 6.3% per year and reached 900 thousand tonnes in 2018. However, China can perform quite well with the imported borates by turning them often in high-tech products, cooperating on this occasion with various international corporations. For instance, Showa Denko produces neodymium-iron-boron alloys jointly with Inner Mongolia Baotou Steel RareEarth Hi-Tech (China). Likewise, Chinese companies collaborate with Magnequench International, Inc., which is the global leader in the design, manufacture, and marketing of neodymium-iron-boron permanent magnetic materials.

More information on the global boron minerals market can be found in the insightful research report “Boron Minerals: 2019 World Market Review and Forecast to 2028”.