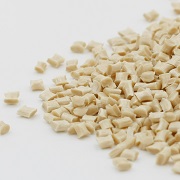 Liquid crystal polymers (LCP) represent a diverse group of polymer substances that, under certain conditions, form an additional phase, known as mesophase, (by a process known as mesomorphism), which is between an ordered solid body and a disordered liquid. So, they have the so-called anisotropic physical properties of crystals, and, at the same time, the isotropic characteristics of a liquid to exhibit some degree of fluidity. The latter means that they are not full crystals, that is, they partially lost a three-dimensional position and a structure, which are present in the crystal. LCPs can be either lyotropic (align into crystalline arrays in solution; exhibit very high melt point and higher intermolecular forces) or thermotropic (align into crystalline arrays while in a molten state; exhibit low melting point and weaker intermolecular forces).

Liquid crystal polymers possess a number of valuable properties. They demonstrate a very high flow without flash propensity; are inherently flame retardant, exceptionally chemically inert and thermal resistant; possess increased mechanical strength, tensile strength, dimensional stability, and weatherability; feature low thermal expansion coefficients; could be processed by injection moulding. Like all polymers, they allow a huge array of adjustments for the control of these properties by polymer science (e.g. adjustment via a degree of polymerization or by copolymerization). For instance, a famous LCP brand of Zenite, manufactured by Celanese Corporation (U.S.) [Celanese acquired LCP business from DuPont in 2010], actually constitutes a broad product line with various characteristics, filler compositions, and attributes. The same refers to all other famous LCP brands like SumikaSuper (Sumitomo Chemical), Xydar (Solvay), Siveras (Toray), or Laperos (Polyplastics).

All these properties, often in combination, allow liquid crystal polymers to be used in a wide range of applications: electrical insulation systems; high-performance fibres; composite materials; optical storage elements in linear and nonlinear optics; holography; actuators; microelectromechanical systems; medical devices, to name just a few. Investigated extensively in the 1900s, liquid crystal polymers underwent actual commercialization in the 1960s and the interest towards them is on the rise.

Being a highly value-added and research-oriented product with versatile, customised and high-tech applications, the market for liquid crystal polymers can feel relatively safe in the current turbulent business environment. However, some of its consumption sectors are heavily affected by the ongoing economic recession caused by the global pandemic. Especially, it relates to the automotive industry, where the sales of new cars dropped by 40% globally, though the demand from the automotive sector is currently restoring. The behaviour of the market for liquid crystal polymers will actually depend on the speed of the global economic recovery, which is unlikely to happen earlier than late 2021 or even 2022. All major manufacturers of liquid crystal polymers [e.g. Celanese (U.S.), Solvay S.A. (Belgium), Toray International (Japan), Polyplastics (Japan), Sumitomo Chemical (Japan), Ueno Fine Chemicals Industry Ltd. (Japan), Samsung Fine Chemicals (South Korea)] are affected by the crisis with a different degree of severity. Some have to reduce capacity utilization rates, some experienced disruption of their distribution chains, but all witnessed the slump in the demand in some LCP consumption sectors. However, the resilience of the polymer sector is intact. For instance, in Q1 2020, Solvay’s polymer sales were in line with Q4 2019 levels due to solid demand in core markets, including automotive, healthcare, and consumer goods, while electronics showed mixed results.