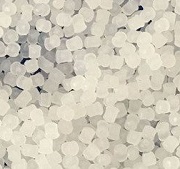 However, the role of fluorine-containing polymers in many vital applications is important. The main monomers of fluorine-containing polymers include the following: tetrafluoroethylene, trifluorochloroethylene, vinyl fluoride, hexafluoropropylene, and vinylidene fluoride. Vinylidene fluoride can be manufactured by dehydrochlorination of 1,1,1-chlorodifluoroethane or by dechlorination of 1,2-dichloro-1,1-difluoroethane, though the details of its manufacturing process are kept as trade secrets. The leading PVDF brands include KF (Kureha), Kynar (Arkema), as well as Hylar and Solef (both Solvay).

The current state of the PVDF market is subdued but robust. The recovery of the Chinese economy from the consequences of the Covid-19 outbreak positively affects the PVDF market as many key fluoropolymer manufacturers are currently involved in operations in China. This refers to the decision by Solvay as of late 2019 to double its Solef PVDF production capacity in Changshu, China by 2022. This decision is driven by a continued strong growth in the lithium-ion battery market for electric vehicles, which is a highly promising sector for PVDF application. It is clear that sustainable mobility will be a domain with significant prospects in the coming decades while Asian markets will have an enormous potential for growth in this sector. The trend of increasing PVDF capacity will be evident not only in Asia, as Solvay increased PVDF production in Europe as well (at its production facility in Tavaux, France).

The expansion decision by Solvay is mirrored by its rival Arkema, the world leader in PVDF manufacture. Arkema scheduled the increase in PVDF and VF2 (vinylidene fluoride) monomer production capacity in China (at the same place of Changshu) for the final quarter of 2020 (Arkema has also PVDF production sites in Calvert City, the US, and Pierre-Bénite, France). While Arkema is fully aware of the current turbulent situation on the markets due to Covid-19, it considers that the expansion is a well-balanced and correct decision to solidify its position as a key PVDF manufacturer. Currently, HaloPolymer (Russia) exhibits similar levels of confidence in polyvinylidene difluoride prospects, effectively increasing PVDF exports. HaloPolymer is known to focus its production of special fluoropolymers mostly at export markets rather than domestic consumption.

These business decisions show a high interest in polyvinylidene difluoride, which is expected to demonstrate the highest growth rate among other fluoropolymers in the nearest future. This interest is invigorated by the strong fundamentals of the PVDF market. This commodity features a robust demand both in traditional applications (e.g. coatings, chemical engineering, and offshore oil extraction) and in emerging applications (e.g. water treatment, lithium-ion batteries, and photovoltaic panels).