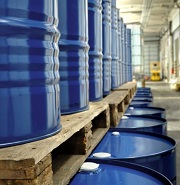 Methyl ethyl ketone is commercially produced via dehydrogenation of secondary butyl alcohol (preceded by butylene hydration), which is its main production route. MEK can be also manufactured as a by-product of butane oxidation or through a pathway involving renewable raw materials (e.g. sugar fermentation). The latter seems a highly prospective direction of the MEK market development. For instance, Shell has recently announced its plans to build an 820k mty biofuel facility at the Shell Energy and Chemicals Park Rotterdam, the Netherlands, formerly known as the Pernis refinery. Shell operates a 90k mty MEK unit at this facility.

Structure of the global demand for MEK by region

The current MEK market dynamics remain somewhat mixed, subject to a region and a specific application. In general, the global MEK market is strongly influenced by such factors as the COVID-19 pandemic and unprecedented rise in oil prices. During Q3 2021, the relationship between MEK demand and supply on the Asian market was rather balanced despite the uncertainties and issues associated with the pandemic and some problems in various MEK-consuming sectors (e.g. semiconductor chip shortage). The state of the European MEK market was characterised by rising demand and supply tightness. The latter was associated with unexpected production outages and planned maintenance activities at various MEK facilities in the region. For instance, this referred to the operation of ExxonMobil’s refinery and petrochemical plant in Fawley, Hampshire (near Southampton), which is the largest refinery in the UK. This petrochemical plant has a MEK production capacity of 135k mty. The demand for MEK on the US market was strong from various MEK-consuming sectors, especially in the coating segment, while supply was gradually improving. ExxonMobil’s refinery, chemical plant, and other facilities (incl. 135k mty MEK unit) in Baton Rouge, Louisiana, experienced only minor impact from Hurricane Ida and successfully resumed their operation in September 2021.

More information on the global methyl ethyl ketone market can be found in the in-demand research study “Methyl Ethyl Ketone (MEK): 2021 World Market Outlook and Forecast up to 2030”.