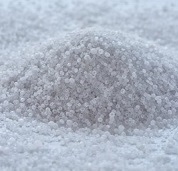 Ammonium sulphate is a popular fertilizer, though this chemical has a variety of other uses, for instance, in water treatment, food industry, pharmaceuticals, woodworking, paper industry, to name just a few. Like all synthetic fertilisers, its current position on the market is ambivalent. On the one hand, its use is indispensable driven by economic considerations of sustaining high crop yields for the needs of growing populations and current consumption levels. On the other hand, the environmental harm rendered by synthetic fertilisers by depleting soil nutrients, eutrophication, reducing biodiversity, and increasing dangerous emissions is evident and well documented, as well as addressed by various regulatory measures targeted at improving the sustainability of the fertiliser industry. These externalities can be exacerbated by the multiple factors, related to fertiliser application, involving weather and climatic conditions, soil types, contextualised agricultural practices, and so on. Eventually, fertiliser use can provide an adverse feedback influence on agricultural productivity which is supposed to raise due to fertiliser application.

The ammoniacal fertilizers, like ammonium sulphate, are manufactured via energy-intensive conversion pathways which heavily rely on natural gas. In the case of ammonium sulphate, its production mostly operates as a by-product from the caprolactam oxidation process. When gas prices skyrocketed in 2021, this had a dramatic effect on the whole sector of fertilisers, leading to limited fertiliser supplies and causing farmers in different places of the world to be extremely anxious about the availability of fertilisers for the agricultural season of 2022, which may directly affect food supply in the coming year. Soaring gas prices made the whole fertiliser sector struggle, while various fertiliser producers had to either stop production or significantly reduce capacity utilization rates. This is primarily related to Europe, which is an important region with respect to ammonium sulphate production.

Ammonium sulphate: structure of the global production by region

For instance, BASF, one of the main manufacturers of ammonium sulphate, had to curtail its ammonia production in Antwerp (Belgium) and Ludwigshafen (Germany). BASF purchases gas mainly on the spot market, which is highly volatile at the moment. Likewise, OCI partially closed ammonia production at its plant in Geleen (the Netherlands). In September 2021, US-headquartered CF Industries, one of the world’s largest manufacturers and distributors of nitrogen and phosphate fertilisers, had to halt its ammonium sulphate production at its Billingham complex (the UK) due to extremely high gas prices. Later, the company restarted it after the interim agreement was reached with the British government, which promised to render financial support for resuming CF Industries manufacturing operations in the UK. Many other ammonium sulphate producers (Achema, Borealis, Fertiberia Group, etc.) had to follow the suit. On the contrary, the US producers performed better. For instance, in Q3 2021, the sales of ammonium sulphate by AdvanSix almost doubled as compared to the same period a year earlier. Of course, it was largely stimulated by the growing prices for ammonium sulphate. AdvanSix’s facility in Hopewell (Virginia) is one of the world’s largest single-site producers of caprolactam and ammonium sulphate fertilizers.

More updated information on the global ammonium sulphate market can be found in the in-demand research report “Ammonium Sulphate: 2021 World Market Outlook and Forecast up to 2030”.