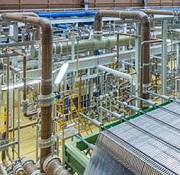 The market for chlor-alkali products acts as a cornerstone of the modern chemical industry and a myriad of other industries, thus participating in the formation and operation of a complex system of interacting raw materials, derivatives, intermediates, and end-products. At a very basic level, the chlor-alkali market primarily deals with such chemicals as chlorine, sodium hydroxide (caustic soda), potassium hydroxide (caustic potash), and muriatic acid; each of these chemicals is affiliated to other commodities and consumption sectors. The consuming sectors for chlorine and caustic soda are not identical (despite tightly coupled production of the two chemicals), which means different supply-demand interaction patterns and often different margins (subject to an end-user of chlor-alkali products), though close interdependence between the markets for both products is inevitable. For chlor-alkali manufacturers, setting the capacity utilization rates concerning chlorine and caustic soda is always a dynamic and flexible process, which depends on which of the two commodities generates better margins at a specific moment in time.

The chlor-alkali market is dominated by Asia-Pacific. For instance, within the chlorine segment, Asia-Pacific accounts for over 60% of the world market. Asia-Pacific (including China) also provides the largest chlorine capacity additions. For example, Tianjin Bohai Chemical Industry Group (China) builds a petrochemical complex, which will add 600k mty of chlorine production capacity by 2023 to its existing 800k mty chlorine capacity. Likewise, Asia Pacific operates the world’s largest caustic soda capacity.

Chlorine: structure of the global production capacity by region, 2021

Due to the fundamental character of the chlor-alkali industry, the general forecast for its development is quite positive as demand for chlor-alkali products will increase, and chlor-alkali market is expected to register a CAGR of 3.5% by 2031, despite various challenges and pitfalls. These challenges are mostly related to a high level of volatility in the chlor-alkali market. This is confirmed by the fact that various companies, like Dow or PPG Industries, sold their chlor-alkali businesses to other companies, (e.g. Olin Corp. and Westlake), though even after selling they safeguarded supplies under special contractual obligations. For instance, Olin has a chlorine supply contract with Dow until 2025 according to which the former is obliged to supply a certain amount of chlorine to Dow.

Since chlorine is traditionally produced by passing an electric current through a salt-water brine to separate chlorine, hydrogen gas, and sodium hydroxide, it is, therefore, a highly energy-intensive process, specifically with respect to electrical energy. For instance, in the U.S., the chlor-alkali industry is the third-largest consumer of electricity among all chemical plants in this country. As energy prices have dramatically increased since late 2021 and early 2022, the costs of chlorine and caustic soda production have grown, sending a ripple effect along with the whole chlor-alkali sector. At the same time, demand for various chlor-alkali products and their derivatives has been also consistently growing, thus tightening supply and putting upward pressure on chlor-alkali product prices. For instance, Olin Corp. recorded a robust increase in the sales of its chlor-alkali products and vinyl products during Q4 2021 mainly due to higher chlor-alkali product pricing, bolstered by rising costs of raw materials, natural gas and electrical energy.

More information on the global chlor-alkali market can be found in the in-demand research report “Chlor-Alkali: 2022 Global Industry Overview and Forecast”.