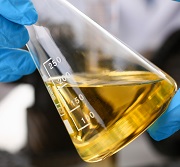 Biodiesel fuels contain fatty acid alkyl/methyl esters, based on renewable and biodegradable biomass. The main pathways for biodiesel production include either chemical methods (e.g., via reactions of esterification and transesterification in the presence of methanol and catalysts) or enzymatic methods (e.g., lipase-based transesterification process). Biodiesel fuels can become a viable alternative to fossil crude oils and petroleum-derived diesel. This trend is driven by multiple factors, but primarily by a rise in environmental and health concerns among the population of practically all countries. It is also supported by environmental laws, regulations, and policy, like the U.S. Energy Policy Act of 2005, which incentivised biodiesel production in the USA. This has laid a robust foundation for the development of the global biofuel market, which will grow from the current level of about USD 120 billion to over USD 200 billion by the end of this decade. Combined, U.S. and Brazil account for over 70% of the global biofuel production. Concerning the biodiesel production, the combined share of the U.S. and Brazil is almost 40%. 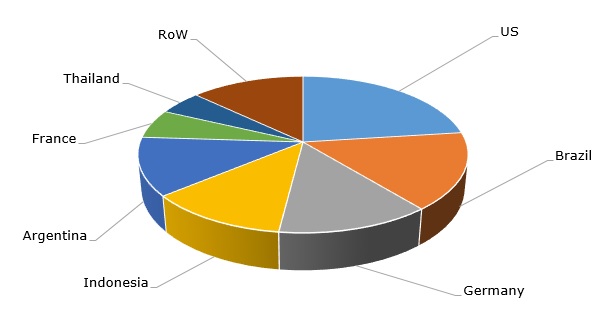 Despite the bright prospects, the biodiesel market is faced with multiple challenges, associated with complex dynamics of various interconnected factors. For instance, the costs of bio-feedstock, like plant-derived oils, account for up to 85% of the total biodiesel production costs, which makes the market especially sensitive to the availability of such feedstock and its productivity via existing technologies. This raises a very important question of how the biodiesel fuel industry will co-exist with the food industry in their competition for the identical feedstock, that is edible oils (e.g., rapeseed, palm oil, etc.). Edible oils constitute a major biodiesel feedstock, in contrast to other biodiesel sources like recycled oils and animal fats. This issue of competition between the food and biofuel industries will be looming large in 2022 as the probability of the global food crisis looks highly veritable this year, buoyed by the low harvests in 2021 and persistently low fertilizer supply in 2021 and Q1 2022. The limited supply of crop-based feedstock and the rise in its costs have already boosted prices for biodiesel fuel in multiple places of the world. Consequently, the use of non-edible oils, waste oils, micro-algal oils (incl. genetically modified), and other innovative bio-based solutions will generate biodiesels for the next and more advanced generations. Therefore, various issues related to biodiesel production technologies are quintessential, while these technologies may turn out to be highly prospective (for instance, the use of biocatalysts instead of chemical catalysts), though their effective commercialization is still a matter of future.

Despite these challenges, multiple key players in the petrochemical market are eager to significantly contribute to biofuel production. To illustrate this point, one can mention Shell, which will build an 820k mty biofuels facility in the Netherlands at the site of its refinery complex, formerly known as the Pernis plant. Planned to come onstream in 2024, this facility will become one of the biggest in Europe to produce sustainable aviation fuel and renewable diesel made from waste. This is an example of transforming a traditional refinery into a sustainable energy park focused on the production of biofuels.

More information on the global biodiesel market can be found in the in-demand research report “Biodiesel: 2022 World Market Outlook and Forecast up to 2031”.