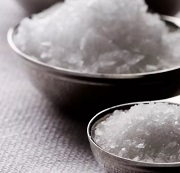 Potassium chloride (KCl; muriate of potash or MOP) belongs to a group of naturally occurring potassium-bearing minerals. Other important salts, that contain the element potassium in water-soluble form, include potassium sulphate, potassium-magnesium sulphate, and potassium nitrate. In contrast to other minerals of such type, potassium chloride contains approximately 62% K2O equivalent. Potassium salts are almost exclusively used as agricultural fertilisers and are known to provide multiple benefits for plants, including improved water and sugar transport, increased protection from biotic and abiotic stresses, and superior plant morphological characteristics, which all results in better yields. As such, potash use as a fertilizer grows at a steady pace of around 3% per year to reach 37.8 million tonnes in 2022. Apart from fertilizers, potassium chloride is used in water softening, feed supplements, glassmaking, cement, de-icing, fire extinguishers, and textiles.

Being an indispensable provisioning system, the market for potassium chloride is thus susceptible to the influence of various macroeconomic, geopolitical, and other factors. Among these factors, one can name the following: a macroeconomic environment in both potash-producing and -consuming regions (the latter are dominated by such countries as China, India, and Brazil); feedstock and manufacturing costs; specifics of agricultural systems and policies, land use and fertilizer application practices (including for individual crops and soils); seasonal and climatic fluctuations; environmental regulation; technological innovations; to name only a few. The feedback interaction of these factors creates a complex and dynamic web of influences, which has both temporal and spatial dimensions.

On the production side, the world MOP industry is dominated by several key players: firstly, by Canpotex in North America (wholly owned by two Saskatchewan potash producers – Mosaic and Nutrien; the latter was formed through the merger of PotashCorp and Agrium) and, secondly, by Belarusian Potash Company (BPC), which markets potash produced by Belaruskali (formerly, Uralkali, who is also a major potash market player, was in a co-operative distribution agreement with BPC).

Potash: structure of the global reserves by country 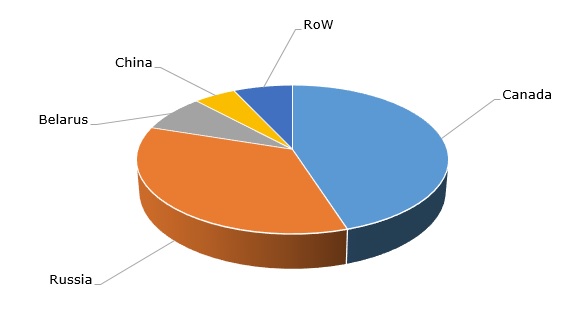 Since major MOP-producing countries are now under some forms of sanctions and restrictions (often indirectly), while major MOP-consuming markets (e.g. China) are still under the influence of Covid and lockdowns, the global MOP market is currently destabilized, which may reduce fertilizer and nutrient availability, thus leading to decreasing crop yields during the coming agricultural seasons. If the problem is not addressed, the world, especially the most vulnerable populations, will face significant hardships. An immediate and significant increase in potash production is highly unlikely as this is a slow long-term process (moreover, in the previous years, potash supply has exceeded demand). Such projects usually take decades. To illustrate this point, one can mention the potash production capacity increase initiated by K+S Potash Canada (KSPC) at its Bethune mine, which will require a couple of decades, or three MOP mines planned by Uralkali by 2030. As such, the global potassium chloride market faces a serious challenge in case potash supplies are not restored. However, the MOP market is also prone to some self-regulation. For example, potash prices in various markets grew significantly in Q1 2022, but later softened to become more acceptable for farmers. Despite this self-regulation, the global potassium chloride market is very far from equilibrium, and the current situation is very uncertain.

Find a detailed analysis of the global potassium chloride market in the in-demand research study “Potassium Chloride (MOP, Muriate of Potash): 2022 World Market Outlook and Forecast up to 2031”.